As a young easterner, I had dreamed of coming west to attend the Calgary Stampede.  I fantasized about stepping into pointed boots and donning a real cowboy hat.  I imagined myself riding a horse in the parade, waving back at all the pretty girls.  In 1967 I finally got my chance, and once on Stampede Park, I was overwhelmed by the magic of it all.  Who puts it together?  How is it organized?  Who is managing all the moving parts? 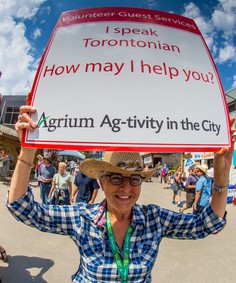 Almost five decades later I’m on the Board of Directors and I know the secret.

The secret is that it also relies on the efforts of about 2300 volunteers who work year-round to ensure that “The Greatest Outdoor Show on Earth” comes off without a hitch every July.

These volunteers are the true champions. 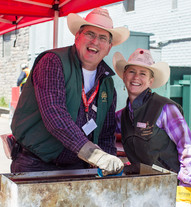 Working together with the full-time staff, volunteers are divided up into almost 50 separate committees dealing with everything from the Heavy Horse Show to Media Relations to Lotteries and the Stampede Talent Search competition.  They meet on a regular basis throughout the year to plan, budget, and execute most of the programs that make up the core of the 10 day festival.

Stampede volunteers are a dedicated lot: some have worked behind the scenes for decades…shovelling manure, adjusting the sound systems, flipping pancakes, or moving livestock.

Their ingenuity keeps the many Stampede programs fresh and relevant, while maintaining the iconic attractions like Rodeo and Chuck Wagons that have characterized the heart of the Stampede for more than 100 years.

Most of the work is not elegant or glorious – it’s not on the Grandstand stage or at the centre of the infield; it’s behind the scenes where it’s hot and dusty, it’s in cramped meeting rooms and smelly stables, it’s on hard asphalt that’s hot enough to burn right through your cowboy boots.  I started out moving cattle for the Cutting Horse Competition, where stepping in wet cow paddies all day long was but a right of passage to joining a committee. 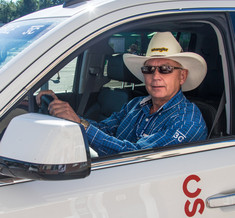 I learned early that the Stampede’s  passionate volunteers all have a single goal:  to see their hard work mesh into 10 days of non-stop western-style fun and hospitality which starts at dawn and only ends after the fireworks at night.

The amazing thing is that these volunteers do it all with joy in their hearts and smiles on their faces. Their enthusiasm for the Stampede knows no bounds.  Some travel more than 1000 km just to supervise the parking of horse trailers.  Many take their 2 weeks of holidays at the same time every year so they can drive the Courtesy Cars, or sell lottery tickets, or host international guests, or watch over the country critters in the Ag-Tivity Tent.  They polish their boots and reshape their hats.  Some even starch their jeans.  All to put the best face they can on this annual celebration. 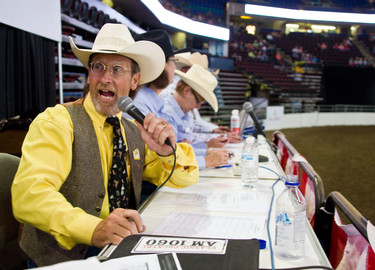 And when it wraps up with the final fireworks, they’ll be eager to sign up for another year, confident that their fresh ideas will make the next Stampede even better.

So here’s to all the volunteers and staff whose efforts have made the Calgary Stampede into the “Greatest Outdoor Show on Earth” for more than 100 years. I’m proud to be associated with champions like you.  We’re definitely greatest together!