When is Close-up too Close?

As self-proclaimed Bucket List Adventurers (BLAs), Jana Kristin and I like to spend as much time as possible travelling to strange and exotic places for the purpose of photography.  Actually this is not exactly true…we’re always excited to travel, and we’ll shoot almost anything, whether it’s strange, exotic, or not. 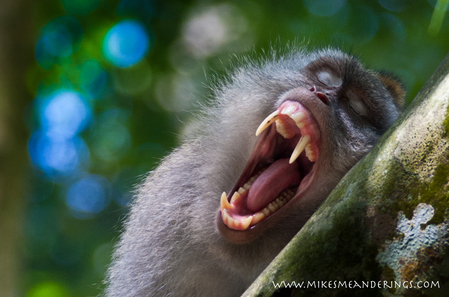 We’re often asked to recommend the ideal lens for a novice travel photographer.  The answer, of course, is “that depends on what you’re planning to shoot”.  It only makes sense, for instance, to use a long telephoto so you can keep your distance when shooting lions and tigers and long toothed baboons in the wild.  On the other hand, capturing that grand vista in the Himalayas usually requires a wide angle.

Photographers who travel in large groups, for instance, often choose to do so because they are most comfortable observing and documenting different lifestyles.  They choose not to be immersed in it.  Opting for the long glass means that they can get the photographs they want without intruding on the scene.  To them, keeping your distance just seems safer, especially if you don’t speak the language or aren’t familiar with the cultural nuances that can turn a good travel experience into a bad one.

We prefer to travel with just a few friends, all of which are great photographers and super people.  We seek out opportunities to directly engage the locals.  Naturally this direct engagement poses the risk that someone may be offended or (horrors!) we may be asked to pay for the photograph. 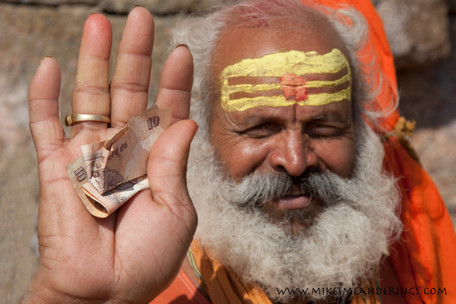 Such was the case of the Indian holy man (I don’t actually know if he was holy, or whether he just dressed like that for the tourists, but he was both photo-worthy and a skillful negotiator).

Once his compatriot sounded the “here come some tourists with cameras” alarm in Hindi he jumped into action, putting himself directly in our path and making it very clear that (a) he didn’t mind getting his picture taken, and (b) this would be a commercial transaction.  Even with a serious language barrier, his “show me the money” stance was all we needed to understand his wishes and so, in order not to offend, we obliged accordingly.

As might be expected in such circumstances, the resulting photograph turned out to be only mildly interesting, being less about Indian religion and spirituality and more about a guy just knowing how to make a buck.

One argument in favour of the long lens is that it may provide a close-up perspective without the need to actually get too close to the subject.  This can be an important consideration when trying to inject some intimacy into your photos.

While travelling in Indonesia we stopped at a port to photograph dock workers unloading cargo. 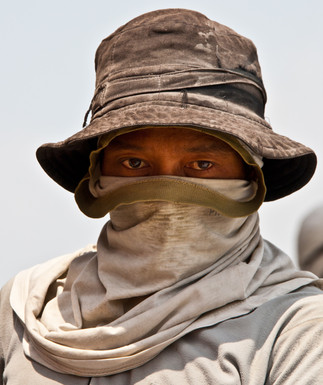 It was a pretty rough neighbourhood to be carrying around fat wallets and expensive photo equipment, especially given the fact that most of the workers were itinerants working for meagre daily wages.  We realized as we made our way around the dozens of trucks, pallets and other dock-side equipment that it wouldn’t take much effort to just knock us on the head and throw us in the water, so we tried hard to stick close together, just in case.

The dock workers noticed right away that we (especially Jana) were out of place, but were mostly too busy to do more than look up briefly as they carried their back-breaking bags of cement from the ship to the shore. One young man was just coming down the gangplank when he spotted Jana and stopped in mid-stride, startled to see a caucasian woman in this environment.  Because I had already focussed my telephoto lens on his face, I was able to capture his stare as he and Jana made eye contact.  The resulting photo conveys an intimacy that couldn’t be achieved if I’d moved in close and broken the spell.

In spite of my penchant to depend on my 28-300 mm Canon as my “go to” lens for travel photography, lately I find myself shooting more and more people using super wide angle lenses.

We found these small boys in Arniston, South Africa, leaping gleefully off a white wall near

the sea shore.  My friend Dennis Cox and I lay down on the grass to place the subjects against the blue sky, but they were too quick and too random to capture with a telephoto.  Switching to a wide angle provided the perfect solution, and resulted in a much more dynamic photograph than simply isolating each boy would have made.

One problem with wide angle lenses for close-ups of people is that everybody suddenly has a big nose;  not the best approach for portraits…especially portraits of women.

In addition, travel photographers wishing to fill the frame are forced to move in much closer, where direct engagement with the subject can hardly be avoided.  Even in densely populated foreign countries where everyone’s “personal space” is much smaller, this shortening of the camera-to-subject distance can sometimes prove to be problematic.

While traveling amongst the tribes of Ethiopia’s Omo Valley, Jana’s normal long lens was stricken useless by desert sand jammed in the barrel.  As the ever helpful partner, I reached into my camera vest and gave her one of my own lenses so she wouldn’t miss any shots.

Just then we come upon a naked boy by the roadside painted in the fashion of the local tribe.

With nary a word she quickly hopped out of the vehicle to grab a portrait.    After the obligatory introductions, mostly made with her big smile and some batting of eyelashes (we didn’t speak the local language), she gained permission for a portrait and brought the camera up to her eye.

She didn’t immediately realize, however, that I had clipped on a wide angle lens, not a telephoto.  When she looked through the viewfinder everything was much smaller and farther away than normal, so she walked forward to move in closer and get a frame-filling shot.

Finally satisfied with what she saw in the viewfinder, she bent down to adjust her point of view and clicked the shutter several times, unaware that she had now significantly reduced the distance between her camera and his bare manhood.

When she finally took the camera away from her eye, she was surprised to find herself in his personal and very naked space.

Never one to become too flustered with anything, she simply smiled a thank you and sauntered red-faced but lady-like back to the jeep.  There she found that we had been photographing her entire exploits, completely ignoring the boy who, for some reason, hadn’t minded her attention at all

Not every subject is so blasé when strangers intrude.

In China, for instance, I was cutting through a back alley when I noticed a couple of old men seriously engaged in a game of chance.  I watched unobtrusively for awhile, and then, hoping for one of those rare photographs that captures the essential character of a place, I moved in quickly and quietly with my fish eye lens.

Just as I was about to press the shutter, one of the players jumped up and grabbed for my camera, shouting in Mandarin about I don’t know what.  Needless to say I was completely flummoxed, and beat a hasty retreat back the way I had come, worrying all the way that I might have inadvertently touched off an international incident.  Only later, when I had calmed down with the help of a couple of Chinese beers, did I check the memory card to find that I had fearfully clicked the shutter just a moment before he struck.  Although he didn’t look nearly as angry as I remembered him in the moment, the image haunts me to this day, a constant reminder of what can happen when you ignore cultural differences as a photographer.

My take away was LIFE LESSON #87:  When travelling in foreign lands, be prepared lest you accidentally offend:  learn the words for “hello” first and “I’m sorry” second.

If you’re going to use a wide angle lens for people photography when you’re traveling, it’s wise to remember a few basic tips.  First, it’s usually a good idea to establish a relationship with the subject before you intrude in their personal space. Second, you should smile and show respect, no matter how the rest of your day might be going.  Third, if you’re planning on shooting really close (like within a metre or so), you may wish to maintain eye contact with the subject by keeping the camera away from your face when you press the shutter.  This is far less intimidating for the subject.  Of course this also means that the photograph may not be framed perfectly, but it’s nothing that can’t be corrected with a little judicious cropping in Lightroom or Photoshop.

While walking through the narrow streets in the walled city of Harar, I came across a young girl washing her hair in a shallow tub on the pavement. Water can be hard to obtain in some parts of Ethiopia and it was obvious that she has only a small amount in her basin.  I had never seen such a sight before.  It seemed like such a personal activity to be doing out in public, and I was instantly captivated by its intimacy.

Sensing that I might have only a brief few seconds to capture this unique image, I dropped to my knees in front of her and put on my biggest, friendliest smile. Holding the camera just above the water in the basin, I maintained her eye contact while I clicked the shutter several times…no focussing, no framing, just guessing at the result.

Rather than being startled or offended, she continued to smile back shyly, obviously enjoying this rather unusual interaction with a strange foreigner.

Still kneeling, I showed her the picture, and for a few brief seconds we connected, no longer strangers, but just two people sharing an intimate, personal moment.

The experience made me realize again why I find travel photography so darn addictive.

To view more of my photographs, please click HERE.